We spoke with Irish director Brian O’Malley to find out more about his new spaghetti western drama series That Dirty Black Bag for AMC+.

O’Malley tells us about his journey developing the project with Italian filmmaker Mauro Aragoni over two years, taking the opportunity to hiring a strong Irish contingent due to Brexit and Covid restrictions, and fulfilling a lifelong dream of directing a spaghetti western.

An eight-part series filmed in Italy, Spain and Morocco, That Dirty Black Bag is a raw, epic and romantic series about the dark side of the Far West. The story describes the 8-day clash between Arthur McCoy, played by Dominic Cooper, an incorruptible sheriff with a troubled past, and Red Bill, played by Douglas Booth, an infamous, solitary bounty hunter known for decapitating his victims and stuffing their heads into a dirty black bag, because, as he puts it, “Heads weigh less than bodies”.

“I was attached to That Dirty Black Bag for over 2 years before we actually started shooting,” O’Malley told IFTN. “After my work with Italian production company Palomar on The Name of The Rose as 2nd Unit Director in 2018, I was kindly asked by producers Nicola Serra and Patrizia Massa about working on a Spaghetti Western TV series with its creator Mauro Aragoni.”

The drama echoes and pays homage to the classic spaghetti western, capturing the genre’s legendary irony, while revolutionizing it in a modern way for new audiences. The series tells of bounty hunters, bandits, and bloody vendettas, lonely souls driven by such great passions as faith, love, and revenge. In the world of That Dirty Black Bag, there are no heroes, nobody is invincible, and predators become the prey.

“I have been a huge spaghetti western fan since I decided I wanted to be a Director, with endless screenings of Once Upon a Time in the West taking the place of any formal film school training,” O’Malley explained. “So being involved in a project like this has been a dream come true for me.”

“Myself and Mauro quickly formed a strong working relationship and together set up the series over two and a half years, during which time Bron Studios came on board as partners,” O’Malley continued. “The two of us worked as a team, designing the look and feel of the series with all departments until we went into production in November 2020. At this point we divided the series in two, with me directing episodes 2, 4, 6 and 8.”

That Dirty Black Bag recently launched on AMC+ in the US and Australia earlier this month. No European date has been announced as of yet, but details are expected to follow in the coming weeks.

Irish director of photography PJ Dillon was someone O’Malley had wanted to work with for some time. “I knew he was a big western fan so when this project came along I felt it was an opportunity to get someone of his calibre involved,” the director explained. “PJ is one of the great DP’s working in the world today and his contribution to this series is immense. Scene after scene PJ ensured we captured something of the highest quality, that could hold its own next to any western.”

“The photography in this series captures the epic widescreen power and romance of the west, with just the right amount of Leone magic to give it that operatic spaghetti western atmosphere,” O’Malley continued.

However, O’Malley and the production team were conscious of not simply creating a “pastiche,” instead setting their sights on making a modern interpretation of the spaghetti western. “Something that would appeal to modern audiences, some of whom have discovered the western genre via games like Red Dead Redemption,” O’Malley explained. “I feel we’ve created something that will appeal to fans of the genre whilst also attracting younger audiences eager to discover the old west.”

Due to the pandemic, the production team found themselves limited in terms of where cast could travel from, but O’Malley saw it as an opportunity to inject some additional Irish influence in front of and behind the camera. “As the UK was difficult in terms of both quarantine and post Brexit visas, it became a great opportunity to cast many great Irish actors throughout the series,” O’Malley told IFTN.

“Beyond the cast we also had many Irish crew involved from AD’s to camera department, all of whom brought their immense knowledge and professionalism to the show,” O’Malley continued. “I’m very proud to be the first Irish director of a spaghetti western, but the added bonus was seeing the Italian, Spanish and Irish crew members get on together so well, making such efforts to ensure the show was of the highest international quality.”

It has been an interesting journey for O’Malley and The Dirty Black Bag, the director admitted that the future of the production was shrouded in doubt at times during the pandemic.  “At one point it felt like it might never get made, and with the pandemic it was put on hold twice,” O’Malley told IFTN. “When we finally got to shoot it, we did so with only a few of our crew being infected throughout our 111 day shoot.”

“Its a great relief to finally be at this stage,” admitted O’Malley. “My father, who introduced me to cinema and shared his love of westerns, passed away in November 2021 but I’m pleased I got to show him the first three episodes of the series.”

“While we were watching Episode 2, which I directed, there was a particular horror inspired scene involving Aidan Gillen,” O’Malley explained. “My Dad turned to me and said – I thought this was a western?”

“He wasn’t wrong, and indeed the tag line for the series is ‘This isn’t your father western’. However my kids beg to differ…” 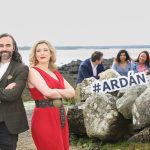 Previous:
Galway Film Centre rebrands to Ardán with new vision to grow the screen Industry in the West of Ireland 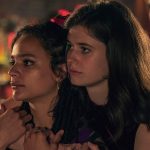 Next:
New teaser released for Sally Rooney series Conversations With Friends for BBC Three and Hulu